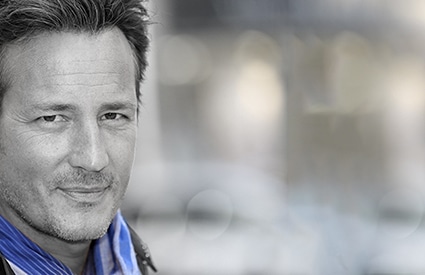 Rosacea is a skin disease that causes redness and swelling on the face. Rosacea may begin as a tendency to flush or blush easily and progress to persistent redness in the centre of the face that gradually spreads over the cheeks, forehead, chin and sometimes even the eyes. As the disease progresses, small dilated blood vessels known as ‘telangiectasia’ and tiny pimples begin to appear on and around the reddened area. However, unlike acne, there are no blackheads or whiteheads. In the past, rosacea used to be wrongly called ‘adult acne’ or ‘acne rosacea’. When it first develops, rosacea may come and go on its own, but when the skin doesn’t return to its normal colour and when other symptoms such as pimples and enlarged blood vessels become visible, it’s best to seek advice from a dermatologist.

The symptoms can be painful or itchy and in some cases there may be a burning feeling over the affected skin and the nose in particular can become very painful. The symptoms can be unsightly and distressing as sufferers are often accused of having a ‘drink problem’ because of their red-faced appearance. Rosacea rarely reverses itself and may last for years and can become worse without treatment. This can be seen in the cheeks with thread veins, redness and small red spots of rosacea and the nose may become sensitive and painful.

What are the signs of rosacea?

The exact cause of rosacea is unknown, although the following factors may be involved:

Research studies suggests that it is actually the bacteria found in Demodex mites, and not the mites themselves, that are directly linked to rosacea. It was found that this bacteria, releases proteins that trigger inflammation in patients with facial rosacea.

This new information may account for the generally successful therapeutic results achieved with antibiotics and antibacterials.

Women may find that certain cosmetic and facial products cause a flare up of their rosacea symtoms and may need to find alternative hypoallergenic products that suit them through trial and error.

An occasional embarrassment or a tense moment may trigger flushing

Who is at risk?

One in ten people in the UK are thought to have rosacea, although in many cases the symptoms are very mild. Rosacea is more visible in fair skin. Rosacea is rare in childhood and develops more commonly in the 30-50 age range. The disorder has been associated with hormonal changes, menopause. Woman are more often affected than men but the condition tends to be more severe in men. It is widely believed that the condition is on the increase, and although people regard it to be an older persons’ disease, it isn’t. There are now more people than ever suffering from rosacea who are in their late teens and early 20s.

In more advanced cases of rosacea, a condition called rhinophyma may develop. Rhinophyma is the thickened and bumpy skin on the nose caused when the oil glands enlarge causing a bulbous, enlarged red nose and puffy cheeks.

Thick bumps can develop on the lower half of the nose and cheeks. It is a very uncommon symptom of rosacea, although if it does occur, cosmetic surgery or laser treatment can be used to resurface the thickened skin. The Fraxel Re:Pair CO2 Laser can be very effective at improving this condition. Rhinophyma rarely occurs in women.

This condition occurs in about 25% of rosacea cases. Some rosacea patients experience burning and grittiness of the eyes, a condition commonly known as Conjunctivitis. If this condition is not treated it can lead to more serious complications of the eyes. The regular use of artificial teardrops may help alleviate these symptoms. Occasionally, eyelid inflammation may become more troublesome and lead to corneal infection. Such infections will require specialist antibiotics and a referral to an eye specialist to avoid the possibility of any infection leading to tissue erosion and damaged sight.

Symptoms of Ocular rosacea typically include:

Rosacea can usually be cleared or controlled by a dermatologist. Many people do not recognise rosacea in its early stages so identifying the disease is the first step to controlling it. Self-diagnosis and treatment are not recommended as some over-the-counter skin applications may make the problem worse. Dermatologists often recommend a combination of treatments tailored to the individual patient.

These treatments can stop the progression of rosacea and can sometimes reverse it, but they must be used in the combination prescribed. There are no known medicines that can prevent or stop flushing permenantly, however there are treatments available for facial redness and telangiectasia. Antibiotics, such as Erythromycin and Tetracyclines, can sometimes be used to treat the papules and pustules that are seen in many rosacea cases, although it is not clear why they work as there is no proven bacteria that actually causes rosacea. They are usually taken in small doses for at least three months.

Metronidazole commonly known as ‘Rozex’ cream/gel is the most widely selected treatment for mild pustules and more problematic rosacea cases. If you have been prescribed a combination of treatments such as oral antibiotics and topical creams, it is important to remember that they work in combination with each other. Don’t stop one or use one over the other, because the cream and the antibiotics target different causes of the rosacea i.e the antibiotics reduce inflammation, and metronidazole (also an anti-inflammatory) has a different action.

Is another cream that can reduce the Demodex in the skin.

Roaccutane is another drug dermatologists may prescribe for resistant patients. This is usually prescribed at a low dose which can be effective and reduce the side effects associated with the drug. Oral antibiotics tend to produce faster results than topical medications alone and are preferable in more severe cases of rosacea. They should be taken for several months but only at a low dose.

Your dermatologiost will provide more information about different antibiotics. Cortisone creams should not be used as a rosacea treatment because they can further affect blood vessels leading to worsened Rosacea with pustule formation. New developments in light therapy are now enjoying very good press, heralding their capability to destroy the tiny ruptured blood vessels that cause flushing, without damaging the surrounding tissue.

There are two main types of light and laser therapy currently being used to reduce unsightly blood vessels:

The PDL has been used to treat port wine stains since the mid-1980s and is currently the treatment of choice for cutaneous vascular lesions. This laser selectively targets vascular lesions through selective absorption of light by oxhemoglobin without epidermal damage.

Cosmetic camouflage may offer an alternative to more specific treatments. Bare Escentual mineral powders are good concealers. It is important to eliminate the factors that cause additional skin irritation. Daily facial products such as sunscreen should be free from alcohol or other irritating ingredients.

Moisturisers used along with the topical medications should be applied very gently after the medication has dried. When going outdoors, especially on warm sunny days, sunscreens with an SPF of 15 with UVA protection is so important. Avoid anything that seems to make your skin red and irritated. You should try to keep cool! Try using cooling fans and use air-conditioning in cars.

A recent survey for Skin & Aging magazine found that 49% of respondents found alcohol to be most irritating to their skin. Fragrance scored 33%, alpha hydroxy acid 30%, witch hazel 24%, salicylic acid 17%, peppermint 12% and eucalyptus 11%.

Another survey found that Rosacea worsens with exposure to heat sources. In the survey of 431 patients, which was conducted by the National Rosacea Society (NRS), 80% of the respondents said they had suffered a flare-up of symptoms as a result of being out in the sun, and 80% said their condition was aggravated by hot weather. More than half of the people surveyed said that a hot bath had brought on Rosacea symptoms and just under half said hot drinks had done the same.

For some people, even heavy clothing is enough to bring on signs of the skin condition. The survey revealed that the following heat sources are likely to aggravate individual conditions:

However, there is a positive to all of this. 84% of the respondents said that avoiding sources of heat had reduced the frequency of their flare-ups. This has been achieved by making more common sense decisions in their everyday lives, such as washing in cooler water, staying inside in very hot weather, leaving a room when it gets too hot, or doing a more appropriate exercise routine.

Some suggested products that may be helpful for your rosacea: